The winter is drifting away around the monster lake. But the ice on the shore has various forms, some of them reminds you of the mysterious creatures that many have seen in the lake. This is pictures taken yesterday in Atlavik where the north wind has blown drifting ice to the shore and the sun has melted it into forms. Is this sculpture a copy of the monsters head?

There is no ice on the monster lake this winter. It has not been cold enough. But the wind gathers the ice crystals in the end of the lake where from it drifts as big white plates, shield for the monsterous wyrm to hide under! 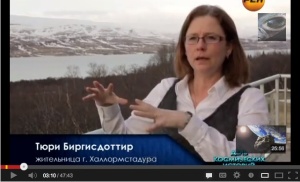 On 23rd February the Lagarfljotsormur was on Russian TV. A program about water monsters around the world spent good 10 minutes in interviews and stories about our famous worm monster. They interviewed Skúli Björn Gunnarsson, director of the Institute of Gunnar Gunnarsson at Skriðuklaustur and two eye-witnesses, Elín Kröyer who saw the monster in the sixties and Þurý Bára Birgisdóttir who saw something big and strange out on the lake in April 2012. Of course the world famous footage from Hjörtur Kjerúlf was also mentioned. Here is the link to the program which starts with our wyrm. Good information for those who speak Russian. http://www.youtube.com/watch?v=zeXB38d2rpc

A group of experts from the TV program Fact or faked came to Iceland last spring. They did research the location where Hjortur Kjerulf shot his footage in February and tried to make things moving in the water there just like the “monster” on the footage. But they also went out to the big Lagarfljot lake in hunt for the worm monster. The episode can now been seen on the web. 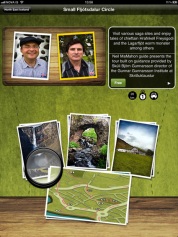 Guided tours around lake Lagarfljot are now available for iPhone & Android smartphones. Local guides tell stories from the past and of course the tale of Lagarfljotsormur is one of the main stories. The smartguide is available both in Icelandic and English and the small Fljotsdalur valley circle is free for download. And you even don’t have to be on the spot using the GPS directed programs. You can just as well download it to your phone or pad and travel around the lake, looking at pictures and listening to stories, sitting comfortably in your sofa at home.

Villi naglbítur is an Icelandic TV & Rockstar doing a travel program for Siminn. He goes to remarkable places all around Iceland. Of course he had to visit Hjörtur Kjerúlf at Hrafnkelsstadir, the farmer who filmed the mysterious monster swimming in the river beneath his home in February. Here you can see clips from Villi’s visit to Hrafnkelsstadir.

The experienced Jeffrey Kofman visited the region of Lagarfljot lake earlier this spring. He investigated the story behind the clip that was presented to the whole world in Feburary, showing a mysterious creature swimming in a river that runs into the lake. Here you can see what Jeffrey Kofman found out on his visit at Egilsstadir and Fljotsdalur. http://abcnews.go.com/Nightline/video/giant-worm-icelands-loch-ness-monster-16531170

The inhabitants of the region of lake Lagarfljot have an annual festival in late August named after the monster. Ormsteiti it is called, a full week of exhibitions, concerts, celebrations and gatherings with a little bit of carnival style here in the far north. And the lake monster of course is in the spotlight the whole week, appearing or not appearing. Check ormsteiti.is for more information.

East Iceland welcomes you with your interest in the lake monster. And there is so much more to see here than the Lagarfljot wyrm. The region is rich of folktales and sightings of elves, trolls and more monsters then the one in Lagarfljot lake. And don’t forget our ghosts who can really spook you in some of the old houses where accommodation is offered. Learn more about the hospitality of East Iceland at http://www.east.is

In the summer 2007 there was an exhibition at Skriduklaustur where the Lagarfljotsormur was in focus. On that exhibition this video was played with the voice of Dagny Indriðadóttir telling the old tale of the origin of the wyrm. http://www.youtube.com/watch?v=9iD-tCcK14E&feature=mfu_in_order&list=UL